The History of the Winterlude Triathlon

Ever wonder about the history of the Winterlude Triathlon and how it got started? If not, then stop here.  If the answer to that question is yes, then read on. 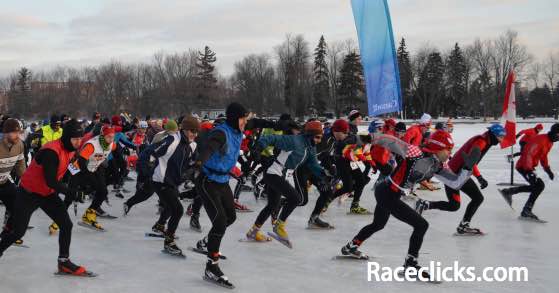 In 1984, Glenda Jones of the Ottawa Pacers Speedskating Club came up with the ingenious idea to string together skating a length of the Rideau Canal with a skiing around the Arboretum followed by a run along the beautiful Queen Elizabeth Driveway. She hooked up “Hurley’s” as a title sponsor putting together the very first, “Hurleys Winterlude Triathlon”.

The original format consisted of a start under the Laurier Avenue Bridge, a one way skate to Dows Lake, an 8k ski through the Arboretum and then a run back along Queen Elizabeth Drive to the finish at Laurier.  The awards were held in the Drill Hall just beside Ottawa City Hall.  The event was a huge success (obviously) with over 600 participants.  As simple as the format was, the set-up for the race was complicated and time consuming – park at Dows Lake, set up ski and run stuff, drive to and park downtown with skates and whatever else you might need.  Post race, drive back down to Dows Lake, pick up your stuff, drive back to the Drill Hall for the food and the awards.  Whew!  It was a long day and that hardly included the race itself.

In 1989, I was skating back to Dows Lake to pick up my ski stuff with a few others, and the temperatures soared to the point we were skating in ankle deep puddles.  The Canal closed that afternoon, and all the ice sculptures melted completely.   There was no Sno-Bus, so we had to walk back downtown with our skates and skis.

In later years, the weather went the other way and was so atrocious with temperatures in the mid minus 20’s with massive winds creating windchill factors of minus 40 to minus 50.  This happened several years in a row and not surprisingly, numbers dwindled. 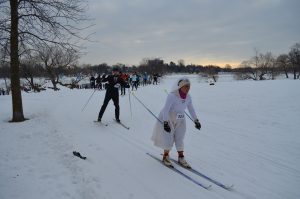 Ski Leg of the Winterlude Triathlon

During those cold years, the Pacers gave up the event and the Ottawa Kiwanis took over.  They organized it and donated the proceeds to various charities around Ottawa.  I started to work at a local running store as manager and became a sponsor of the event.  As such, I sat in on some of the organizing  meetings and suggested a location change –  move the event to Lansdowne Park, skate to Pretoria Bridge, turn around then skate back to Dows Lake, ski in the Arboretum, and then run back to Lansdowne.  The run would be shortened to 5k, which would make the non-runners happy, and lessen the impact of extreme conditions.  The pre-race set up, participant version, was a bit simpler with easy parking and less distance for set-up.

The cold years continued and the numbers dwindled more.  There was one year when the winds were so strong it knocked over the ski racks and broke a few pairs of skis and poles (one of the reasons we don’t use racks anymore).  In 1998, the race was cancelled due to the Ice Storm.  It returned in 1999 but participant numbers got so low in 2000, with two weeks to go before the event, the Kiwanis decided to cancel the event – it was just not financially viable and they were trying to raise money, not lose money.

As a staple of Winterlude, the NCC really wanted the Triathlon to happen, so I volunteered to take it over.  In two weeks, along with Don MacDonald, we put it together and pulled it off.

It’s been a Zone3sports production ever since.

We continuously fine the the event and we added relays in  2005 or so.

Admittedly, we had some horrible years of grooming and terrible weather.  We fine tuned things and eventually came to the realization we needed a professional groomer for the ski course.  Enter Lafleur de la Capitale.  These guys are absolute magicians when it comes to setting ski courses and we have had some fantastic conditions ever since. 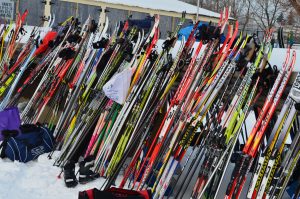 After a few years, we re-jigged the format to do everything from Dows Lake with an out-and-back skate, loop ski (as of 2014, a two loop ski) and the run on the ice.

Through many of the years, even though I helped organize the event, I was able to jump in to participate at the last minute.  I was essentially a lead vehicle (without being in the lead) who could make sure everything on the course was correct.  I had a chance to see the race from the participant perspective.  Eventually, I figured it was time to sit out a year to see what it looked like from the outside and realized just how chaotic and fun the transition zone was in the middle to back of the pack.  In 2010 or so, we split the transition zone in two–skate in/ski out and ski in/run out.  This really cleaned things up.

In 2006, a local Award was created called the Rudy Award.  This prestigious award was presented to those people who participated in the Winterlude Triathlon, the Gatineau Loppet, the Rideau Lakes Tour, a marathon and an ironman triathlon in a calendar year. 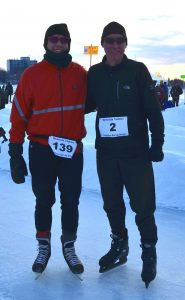 Competitors at the Winterlude Triathlon

For several years, we used HMCS Carleton on Dows Lake for the awards ceremony, but in 2011 or so, the building was condemned and we had to keep everything outside.  There have been some cold years, no doubt, but really, this has added to the winter aspect of the race, as if skating, skiing and running almost 5k on a sheet of ice wasn’t enough.

In 2016, the Winterlude Triathlon joined forces with Triathlon Ontario, and in 2017, will be the Ontario Winter Triathlon Provincial Championships.

The race has had many, many configurations.  In fact, as one of our regular participants has said, he did the race seven years in a row, and none of them were the same format.  They include:

We’ve had Olympians, National Champions, professional triathletes, visually impaired and deaf participants, and, of course, regular folks.  We’ve even had our own Rosie Ruiz (of Boston Marathon infamy).  Yes, someone actually cheated – cut the run course somehow to win the women’s race running quite slowly with a walkman on, no frost, and no snot covered face.

We have also had a very dedicated group of volunteers that have been with the event for as many years as we’ve been organizing it.  We thank them for their continued commitment and support.

The Winterlude Triathlon is scheduled for Saturday, February 4, 2017


Warning: count(): Parameter must be an array or an object that implements Countable in /home/customer/www/raceclicks.com/public_html/wp-content/plugins/adrotate-pro/adrotate-output.php on line 648