Manotick Miler is unique running event with a strong emphasis on community building. We sat down with race co-founder Danielle Guffie recently to learn more about this growing event.

RC Ok, first question – Help us understand the “Miles”; why are the Manotick Miler race distances are all measured in miles? You don’t see that too often.

DG For the first three years we had called the race the Manotick Road Race with your typical, 5K, 10K and 1K family run. Because the market is so large for races we needed and wanted to be unique. We needed a draw, something different. I guess the real kickstarter tho was when we lost the domain name manotickroadrace.com and we had to change the brand entirely so people wouldn’t go to the old site and get confused. So Manotick Miler it was and it just clicked! The brand was really well received and we believe that all things happen for a reason. It was a great time to change the brand as well! We are looking to add a 15 miler (24K) in the next few years once we get big enough! 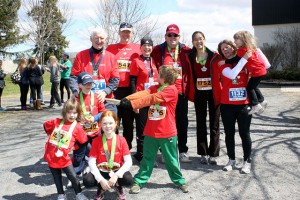 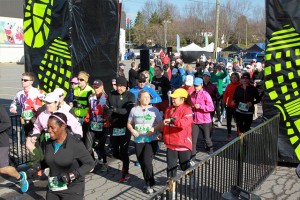 RC Can you tell us about the history of your event?
DG When Laura and I decided to venture out on our own we really wanted to start with something local because we knew we could get the community and our friends to come out and support us and Manotick really and truly is a beautiful town to run in. So we created the Manotick Road Race in support of the Foundation to fight Obesity in Children from the Greco Brand. We both used to work for Tony so we just thought it seemed to fit. We had a 10K, 5K and 1K family run around the Manotick arena park and it was a beautiful sunny day with 275 runners. We thought that was pretty good!

The next year we made it to 500 runners and than 1100 and last year was the first year for the Miler. This will be our fifth year running that we are celebrating and we have added things like a post race tailgate party by Big Rig Brewery – prize money for the winners and have A-list sponsors attached to this event such as Donnelly Ford, W.O. Stinson & Son, Grenville Guardian Real Estate, Popeye’s Supplements, Minto, Dymon Storage and Greco.

RC What makes the Manotick Miler such a great event?
DG The atmosphere!! Laura and I pride ourselves on being personable, down to earth and genuinely caring for each and every runner! We want people to come out and race and be challenged but also have a sense of community ,camaraderie, friendship and HAPPINESS! Our mission statement really is along the lines of we want to change the city of Ottawa for the better! We want to make an honest living, be role models in the city and to our children and just create and spread happiness and joy wherever we go. A great way to do this is through events that all of Ottawa can participate in. That’s really what it’s about. We support other local events in the city and promote our runners to run their races too! In the end we just want people to say “those girls did a great job and I had so much fun”. Something our families and us are very proud of!

RC For those runners who are returning, is there anything new this year?
DG We are hoping to add some family activities for the children after the race. Our Race Expo will be condensed but even bigger and better than last year! Big Rig Brewery will be back with their post-race tailgate party and will donate $1 from every beer purchased after the race!! We’d love to get a couple of Ottawa Senators out such as Curtis Lazar and Bobby Ryan and Chris Phillips! Who knows maybe they’ll run!! Each runner gets an awesome Miler medal, T-shirt, swag from sponsors, race expo goodies and a beautiful and scenic route!

RC We understand that you help support the Ottawa Heart Institute; can you tell us a bit more about that?
DG In our second year we went to the Manotick Kiwanis Club to look for their support regarding volunteers for the event, they had said if they volunteered could we dedicate the race to Al Corace and give the funds to the U of Ottawa Heart Institute. We said Yes Absolutely. Al Corace did the Walk, Run and Roll in Manotick years and years ago so it just seemed fitting. We worked with his wife who was also a Kiwanis member and we later joined the club. They are a dedicated group and do so much in Manotick and surrounding areas. That is where it all started and we also have added a new fundraising platform on our own site so people can fundraise on they’re own as well! We do a Quiz Night fundraiser with all proceeds going to the Heart Institute and we usually sell out quickly. We will support the Heart Institute as long as we can! They are a great institution and have helped so many and we truly appreciate the people we have met since our second year. It is such an amazing feeling to give back!! What’s great is they never have expectations and whatever they receive they are always more than happy and grateful for.

RC Complete this sentence: The Manotick Miler is great for anyone who……
DG WANTS TO HAVE A GREAT TIME and wants a small town big race feel!! 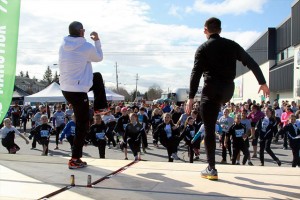 RC Is there anything else about the Manotick Miler that you’d like to share?
DG We are two women, coaches and fitness enthusiasts who are determined to grow the Miler to 10,000 people, showcase the small boutiques we have in Manotick and basically spread joy and happiness. It’s risky starting your own business, let alone being women in a very competitive market but we will always be Danielle and Laura and we just want the Miler to be filled with Happiness, a sense of competitiveness, and a race that any sort of runner/person looks forward to participating in year after year. The miler is our “baby” and we love this race so much!

There is a race in Utica, called the Boilermaker. It’s a 15K and it 5K and it sells out every year for the past 38 yrs. The entire town shuts down and embraces the event. That’s what we want for the Miler! We want to create a legacy and pass it on to our children’s children etc.

Were just two mom entrepreneurs trying to make an honest living, all while having fun and add more excitement and FUN to the city we love so much! Ottawa!

For more information on the Manotick Miler check out their website here.