In much of what you read about cycling and training, common cycling terminology is used in regard to gearing, but may not be so common. I would like to explain some of that terminology now.

As I hope you are aware, the bigger the ring in front, and the smaller the cog in the back, the harder it is to pedal, but the farther you go per pedal revolution. Conversely, the smaller the front ring and the bigger the cog in the back, the easier it is to pedal because you travel less per revolution. The distance travelled is expressed as meters development or meters per pedal revolution (the actual number is less important than the concept). There are some gear ratio combinations that cross over from big and small ring, which is why it is not always necessary to change rings on certain terrain.

It is a very good practice to try to keep the chain around the middle of the cassette, as the chain is at its most efficient angle (straight). You should try to never be in the big ring and the biggest cog in the back, just as you should try to never be in the small ring and the smallest cog. This is known as either big/big or small/small. The reasons for avoiding these combinations are numerous, and relate to the chain angle or length. They include:

Back to the compact cranks for a moment—this type of crank is not a substitute for pedaling or training. What they do is allow for an easier and more consistent cog set selection. As mentioned, the difference in distance travelled is expressed in meters per revolution , and can be seen in the chart below. In terms of equivalencies, if you are not a strong climber and feel the need for an easier ratio than 39×25, then you can see a 34×21 is very close, and a 34×23 or 25 give you much easier pedaling. It would be like having a 39×28 instead of a 25. Since you can only have 10 cogs, you would not have to give up a cog on the other end to make room or have too big a difference between some of them like 19, 22, 25, 28 as your last three. Just like that really picky Goldilocks, one gear will be too hard and the next one up too easy. 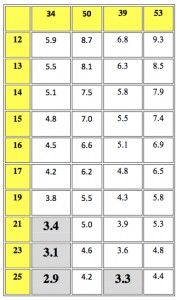 Changing crank sets is a fairly expensive proposition, so I am not suggesting you switch crank set ups, just explaining it.

Make sense?  I hope this helps.

Written By Rick Hellard, Head Coach @ Zone3sports, an Ottawa based triathlon coaching service that has achieved amazing success at the long distance triathlon.